Soup is one of my favorite things. It not only tastes good, but it makes me feel good. Its also one of those things that with a little rooting around the pantry I can generally pull off some thing that looks likes I put a ton of thought into it but really kind of fell together while I was wandering around my kitchen. Soup is also a perfect Sunday Supper when the Sunday in question follows a late night out w friends & Capt Morgan that concluded with animals that absolutely refused  to sleep because OMG THERE IS ANOTHER DOG AND NEW PEOPLE IN THE HOUSE WOOOOO!: Read –  the adults in the house didn’t get any sleep, either, and I wasn’t feeling hours upon hours in the kitchen but wanted dinner that tasted like I did.

This soup? This one is one that I plan to make usually. It is also the one that I get requests for most often. I’m ok with that, though, its also a favorite one of mine to eat. It’s a little bit different every time I make it; sometimes it has bacon or ham, occasionally I’ll toss in some carrots, I have substituted crab for the chicken, tossed in some mushrooms, today I roasted half a head of cauliflower …it is a very forgiving and flexible recipe.

Yes, we are about to make a delicious soup, but we are also about to roux! Roux is a classical method of thickening soups and sauces. In a nutshell it is a cooked blend of equal parts by volume fat, usually butter, and flour that when added to a hot liquid and cooked out at a simmer will cause it to thicken. I use this method to thicken all cream soups and cream based sauces; it lends a velvetty texture and mouth feel to the final dish that you can’t get using a slurry. The roux method of thickening is also much more stable for reheating on the stove top or the microwave. I generally cook my roux separately from the the soup so I have complete control of the thickness at the end when I add it in and allow the soup to thicken to my liking.

Roux is a pretty cool little trick because of how it benefits texture and flavor. Creole sauces are thickened with roux cooked over low heat until it gets a dark roasted brown and rich toasted nut flavor. The roux we are using here is a blonde roux – it is cooked out for a short time and develops a blonde color. Few things to note about roux –

If I had the stuff to make a homemade chicken stock for this today I would have but I was totally lazy & used the boxed. Remember though – NOT broth – stock. Have fun with the ingredients in this soup and make them your own. The only parts you really need to adhere to are the parts that make up the liquid part of the soup base, have some fun with it. This is the one I had for my Sunday Supper with Bacon Skillet Corn Bread, recipe to follow for that, too.

Preheat your oven for 375. Heat the olive oil in a heavy bottom soup pot and add the onion, celery and garlic. Season with salt & pepper and sweat over medium heat until the onion & garlic smell sweet. Add all of the stock and potatoes and bring to a simmer. Cook at a gentle simmer until the potatoes are cooked through. 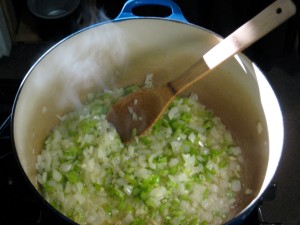 Once you have the soup set to simmer:

cooking out the roux

Everything that tastes good is now loaded into the simmering soup and by now the potatoes should be cooked through. Check your seasoning now, you will probably need some salt & pepper added. Bring the soup up to a gentle simmer & give the roux a stir over low heat to make sure it is pourable. When the soup simmers slowly pour the roux into the soup while stirring with the whisk. It will begin to thicken almost immediately so adjust your pour as necessary. Simmer for another few minutes while stirring with a wooden spoon to cook out the roux completely and let the soup thicken. Taste and adjust seasoning as needed with additional salt, pepper & hot sauce.

After the roux is cooked out reduce the heat and add the cream. I let it cook out a bit longer to marry flavors, but never let it get even up to a simmer. The finished soup…

Tonight I made corn bread but also good with toasted baguette & grilled cheese sandwiches. It makes a lot, but the leftovers are awesome lunches!
I bake this corn bread in a 9″ cast iron skillet. Its perfectly seasoned so nothing ever sticks to it, especially when I add in the bacon here. I have never tried this in any other kind of pan, but feel safe in assuming that starting the bacon in a saute pan and transferring to a different baking pan would work, too. This amount of batter would work in a 8×8 baking dish, 2 bread pans or 10″/9″ cake pans. Adjust your bake time for the pan size.
Bacon Skillet Corn Bread
Heat the cast iron skillet over medium high heat. Medium dice the bacon. Add to the skillet and cook until the bacon pieces just start to crisp up and the fat is rendering out. While the bacon is rendering mix the dry ingredients together with a whisk, in a separate bowl mix together the wet ingredients. Combine the wet and dry and fold together with a rubber spatula to make a thick batter. Pour the batter over the rendering bacon and place in the 375 oven. Set the timer for 40 minutes and check. Cornbread is dome when the center is firm and springs back to the touch. Give it up to 10-15 more minutes to finish baking if needed.

heading into the oven

When the cornbread is done use a paring knife to loosen it up from the edges and invert onto a plate. Cut into wedges, serve with butter. 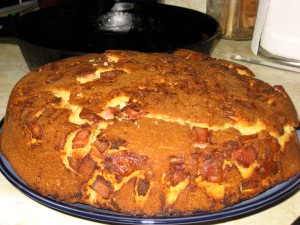