Wow. That is a long title. Sounds all sorts of difficult to make, too. Start to finish in about an hour and a half. I kid you not. I made this with mashed potatoes, too.

Oh and any beer people – yeah I know I cooked with a McChouffe. It was incredible :) If by chance you don’t have a bottle of McChouffe laying around that your husband is willing to share with dinner any Belgian or Belgian style Double will work – Gulden Draak, Bornem XX, Maredesous 8, Leffe Brown – think sweet brown or red ale. Also good with a cabernet or chianti if you’d prefer wine. This actually a take on a cognac cream sauce, so also an option, but cut the amount in half & watch for flame ups.

First a word about pork tenderloin. Sincerely the most under appreciated cut of meat out there for the price. It is the filet mignon for a pig. It is also so ridiculously easy to work with and priced so cheap I am constantly amazed more people do not eat it more often. It is a personal favorite in that it packs all the delicious of a beef filet minus the red meat issue and the ridiculous price tag. Unlike some of the pigs cheaper cuts pork tenderloin, similar to pork loin, is a quick cooking cut of meat, around the same amount of time required to cook a chicken thigh or leg. The reason I prefer tenderloin to loin? The loin or loin chops are really easy to over cook & dry out and they are really only good when cooked on the bone – this does not always translate well to every recipe application. Tenderloin, on the other hand, is amazingly tender, is quite hard to dry out even if cooked to well done and plates much nicer than a sliced loin or loin chop. Dont get me wrong, I loves me a good 1″ thick center cut pork loin chop, but tenderloin is much more practical for everyday use and tastes better most of the time.

Pork tenders are packaged 2 whole tenderloins per package; portion wise I usually allot 1/2 of a tenderloin per person unless I am feeding eaters at which point I make more. I’ll be honest – I ALWAYS cook too much food. It’s kind of my thing…it’s what I do. Since I am usually cooking for just the two of us I cook off both and use the leftover one to slice down and make sandwiches. Yes, I cook intending leftovers to make things out of…we can call it menu planning? Cleaning pork tenderloin is easy. When you take it out of the package remove the silver skin from the thicker end with a boning or paring knife.  There is rarely much, if any fat to trim off. From there you can roast them whole or, like I do for this recipe, cut them down into 1″ medallions for searing or grilling (also really good skewered for kebobs).

Brace yourselves…I am about to dispel a long time food paranoia (I seem to be doing a lot of that this week, huh?). Pork does not have to be cooked to a second death in order to be safe to eat. I eat pork loin and tenderloin the same way I eat my beef – medium rare. I am still here, so this obviously is not an immediate death sentence. Many, many moons ago, prior to the strict regulation of the diets of domestically produced livestock, trichinosis (that link takes you to the gov info page) was the reason it was recommended that all pork be cooked to well done in order to kill the bacteria. Unless you are out killing your own wild pig it is a non-issue today. The loin, loin chops & tenderloin are the only parts of a pig I will eat cooked to temperature…but that has little to do with concerns about the safety of eating the pork and more to do with the quality of the end product; those cuts are all best cooked quickly whereas most other parts are best cooked low & slow. No one wants medium rare pork butt or ribs…they would be inedibly chewy. All I’m saying is you don’t HAVE to cook the pork until it dies a second time and that eating pork the same way you would eat beef is ok. And for the record on ground pork products like ground pork or sausage I cook those medium well – well done, but that is more a textural issue than fear of deathly illness.

Ok, back to dinner. I timed this one because its really quick but looks kinda fancy. I started at 7pm, I was finished & plated by 8:15. Specifics for the brussel sprouts will be in its recipe, but they are also worked into the pork recipe so you can get it all to the table at once should you choose to make these together.

First thing is get your taters on the stove in some salted water. I didnt do a recipe for them, but they are simple. Boiled potatoes, butter, heavy cream, salt & pepper. How to make them perfect: mash them as soon as you drain off the water THEN add the butter, cream and seasonings and mash some more. Do those 2 things and you will never need more than a hand potato masher for perfect potatoes.

Once they are on the stove clean and cut the pork tenderloin, lay on a plate and season one side with salt and pepper. Heat a large skillet, preferably non-stick, over medium high heat, add a couple Tbsp of olive oil and let that get hot. When its hot add the medallions, season the back side and let them cook for about 3-4 minutes. They will get a nice caramelized color. Flip them over, 3-4 more minutes on the other side, same nice color. Lower the heat, remove the medallions to a plate and hold for later. 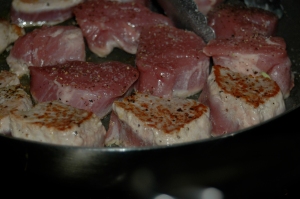 While the pork sears do the vegetable prep – cut the onions, bell peppers, garlic, mushrooms. Also cut the sprouts in half, dice bacon and julienne shallot for the sprouts. You dont want to screw around with the meat while it sears and you’d be shocked how much can be done in 180 seconds x2.

When you get ready to start the sauce in the pork pan get another pan on and start rendering the bacon for the sprouts over medium heat. You want to get all the fat out you can so take it slow. Give it a stir while you are building the sauce for the pork.

Back to the pork pan ~ Add the onion, peppers and garlic to the hot pan. Saute over medium high heat, let the onions take on some color and let the garlic sweeten up. When the onions are ready add 2 Tbsp of butter and let melt then add the mushrooms and saute until tender. Season with salt & pepper.

While the sauce reduces the sprout bacon should be crisped. Add the julienned shallot and saute until tender and sweet smelling.  Add the halved brussel sprouts, season with salt and pepper and use a spoon to toss with the bacon fat and mix together all the bacon and shallots evenly. Continue to cook over medium heat, stirring periodically.

When the sauce for the pork is reduced by half and thickened put the pork medallions & the juice on the plate back into the sauce and toss with the sauce. You are reheating and finishing cooking the pork in the sauce; reduce the heat and cook at a gentle simmer for about 4-5 minutes. While this is happening I am mashing potatoes & stirring sprouts. Add 2 Tbsp of butter to the sprouts and continue to stir, they should be about done by now.

reheating the pork in sauce

When the pork is heated up remove from the pan and put on a serving platter. Raise the heat and bring the sauce to a simmer. Swirl in the butter to melt it, adjust seasoning with more salt & pepper then pour over the pork medallions.

By now the sprouts are perfectly cooked and ready to go into a bowl. Dinner is served!

Render the bacon until crisp over medium heat. Add the shallot and cook over medium heat until tender and starting to smell sweet. Add the halved sprouts and season liberally with salt & pepper. Toss the sprouts to coat in the bacon fat and distribute the bacon pieces & shallot. Stir periodically while they pan roast over medium heat for about 17-20 minutes. When they are about done add 2 Tbsp of butter and stir in to melt. Taste for seasoning and doneness then serve!