So yeah, it’s freaking hot. Unreasonably so the last few days. I’m not complaining, I quite honestly find complaining about the weather to be one of the most irritating kinds of complaints ever. You can’t DO anything about it so why complain, know what I mean? It does make finding the motivation to cook hard, though. Who wants to turn on a stove when its already 90 degrees outside, whether you have central AC or not? Which for the record I do not. There are lots of charming things about old Craftsman houses…the lack of duct work is not one of them.

Hot or not we still have to eat. I turn to the grill usually, it’s outside and I can pretty much adapt anything to cook out there just to keep from having to make the house hotter than it already is. Even that doesn’t help when it’s the kind of hot that saps the appetite. When that happens I revert to light, bright and flavorful dishes, things like tacos, lettuce wraps, marinated vegetable salads – items the pique the appetite with bold acids and fresh flavors; they tend to cut through the hot and make you WANT to eat.

Brushetta is Italian in origin. It really only means a crisp toasted crouton rubbed with garlic & olive oil and is served with any number of toppings – tomato, herbs, cured meats, cheeses, tapenades, etc. Here when you say brushetta people usually think of tomatoes, garlic & basil on a crisp crouton. Whatever you put on top it’s delicious, I am partial to a fresh tomato topping, especially when tomatoes are real tomatoes, like the ones I found at the farmers market. I was putting this together as a side dish for a grilled chicken breast, so I wanted it to have more umph than what I would make as an appetizer.

Enter in some beautiful zucchini. Zucchini are kind of slimey when raw, so they had to be cooked. I happen to LOVE grilled zucchini – really simply drizzled with olive oil & seasoned with salt and pepper & quickly charred on a hot grill – so I did just that, diced them up and tossed them in to my mix. Perfection. I kid you not. I’ve made it twice since then it was so good. Even better for lunch the next day.

First, the recipe for the Bruschetta, after, a good go-to recipe for crostini that works for, well, anything you want to serve with or on a crostini. This was a perfect finger food side dish for a dinner on the porch AND an awesome appetizer for Father’s Day dinner with my parents. Bruschetta, this one and others, makes many appearances on my summer menus, when vegetables are at their peak. YUM!! 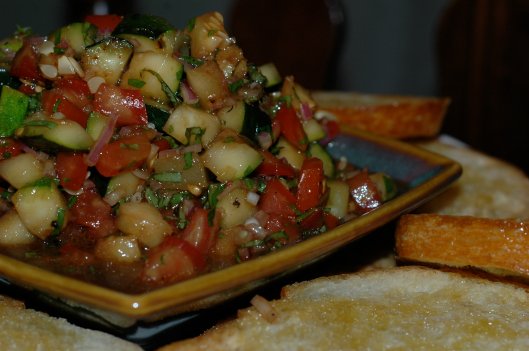 To Grill the Zucchini – heat the grill to HOT, I leave it on full blast. Cut the zucchini into 1/2″ thick medallions and lay on a plate in a single layer. Drizzle with extra virgin olive oil and season with salt & fresh ground pepper. When the grill is all sorts of hot grill the medallions. When you get the last one on the grill start flipping the first one over to the other side and when you get to the end of the flip start taking off the first ones; they should have nice grill marks on both sides but not be over cooked. Lay them back on the plate in a single layer & put them in the fridge while you prep the rest, you want them to stop cooking and cool so they aren’y mushy. You’re done with the grill, unless you are grilling the crostini, then do that now and then turn off the grill. 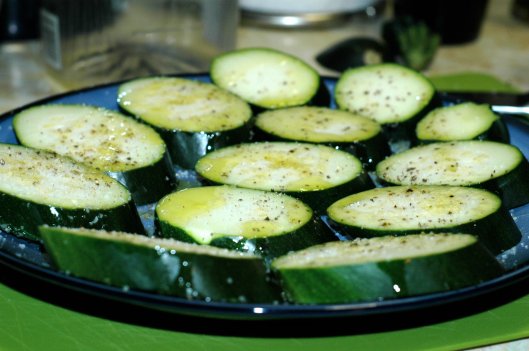 To make the bruschetta remove the core and dice up the tomatoes; you want about 3 cups total of tomato when it is diced, so adjust the number of tomatoes you need by their size. This recipe is all sorts of flexible, so whatever you have will work. Mince the shallot and herbs, add to the tomatoes. Add the balsamic & oil and mix to coat.

When the zucchini is cooled dice up and add to the tomato mix, taste and season with more salt & pepper if needed. The longer this sits the better it gets, I let it sit for an hour at room temperature before serving.

I use shallot because it gives it a hint of garlic flavor with the crunch of red onion. I don’t generally use raw garlic in bruschetta, it is far too harsh as it sits. You can substitute some chopped red or sweet onion and some fresh garlic, but I really would recommend the shallot.

Now what to put it on….Crostini. There really isn’t a ‘recipe’ for crostini, but you don’t need one. Basically you want bread sliced thin, about 1/2″, I do this myself or you buy it that way, rub each slice with a peeled clove of garlic, lightly drizzle both sides with olive oil, sprinkle the top with sea salt & some fresh ground pepper, then either bake or grill.

I made a Baked Crostini, I already had my oven on for baking cookies, so why not. For a baked crostini I use a baguette, Italian or traditional French bread, something that is dense and will crisp up well. I like baked crostini because they are usually crispier than their grilled counterparts, and handle wet stuff better. Bake them on sheet tray(s) at 375 until they are golden browned and completely crisped or, if you like the bread softer, when it is toasted. Let it cool on the tray before moving to a serving platter or basket – the hot bread can sweat ruining all the crisping you did.

For Grilled Crostini I usually pick a chewier, crustier bread – a Tuscan style or cibatta kind of bread, but a baguette works well, too. The texture after it is grilled is ideal for the delivery to all kinds of delicious into your face and the little bit of char is delicious. These can be stacked up as they come off the grill, they don’t get crisp, so it’s not really a concern. 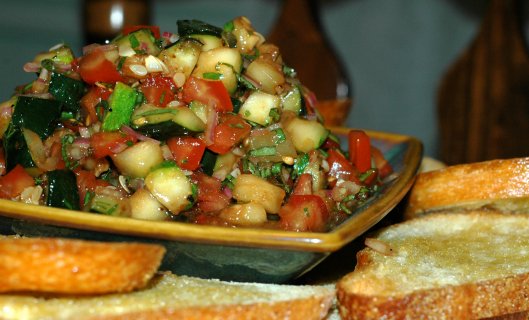 Coming up over the weekend and into next week – a homemade angel food cake that is super easy & delicious and because of all those egg whites a couple ICE CREAMS!!! I couldn’t waste them, now could I?